A growing body of research has evidenced that early childhood experiences can have a significant impact on outcomes in later life. Adversity during childhood can increase the risk of violence victimization and perpetration.

Adverse childhood experiences (ACEs) are stressful experiences occurring during childhood that directly harm a child (e.g. sexual or physical abuse) or affect the environment in which they live (e.g. growing up in a house with domestic violence).

To better understand the impact of early childhood experiences on individuals, multiple research studies have been carried out to measure the prevalence of ACEs in Wales, the impact these early childhood experiences can have on individuals across the life course, and opportunities to mitigate the impact of trauma on negative life outcomes. This research has assessed ACEs in the general population, as well as more vulnerable groups (e.g. the homeless population, the offender population and refugee population). Within the general population of Wales, almost half of the population had experienced at least one ACE (47%), while 14% of the population had experienced multiple ACEs before the age of 18 years (4+ ACEs).

This research measured exposure to multiple forms of adversity, which highlighted the following prevalence in Wales.

Exposure to ACEs can disrupt child development, resulting in cognitive, social, emotional and behaviour deficits. As a result, ACEs can lead to poor outcomes across the life course, effecting physical and mental health and leading to the adoption of health harming behaviours (e.g. alcohol and drug use). The research supports a dose-response relationship between ACEs and poor outcomes, with higher exposure to ACEs increasing the risk of negative outcomes in later life.

However, not all children and young people who experience ACEs suffer the negative outcomes in later life. Resilience plays an integral role in mitigating the impact of ACEs, whereby individual and community factors offer protection from the harmful impacts of ACEs on health, well-being and prosperity across the life course.

Key reports on the impact of ACEs and the role of resilience include:

Sources of resilience and their moderating relationships with harms from adverse childhood experiences: Report 1: Mental Illness

The impact of ACEs on violence in Wales

As well as the research carried out with the general population, research has explored the impact of ACEs in more vulnerable groups (e.g. the homeless population, the offender population and refugee population). This provided a strong evidential link between early childhood experiences, vulnerability and crime; which highlighted that ACEs can increase the risk of individuals being exposed to violence, either as a victim of perpetrator, or engaging in behaviours associated with violence (e.g. substance misuse). Compared to people with no ACEs, individuals exposed to 4+ ACEs are: 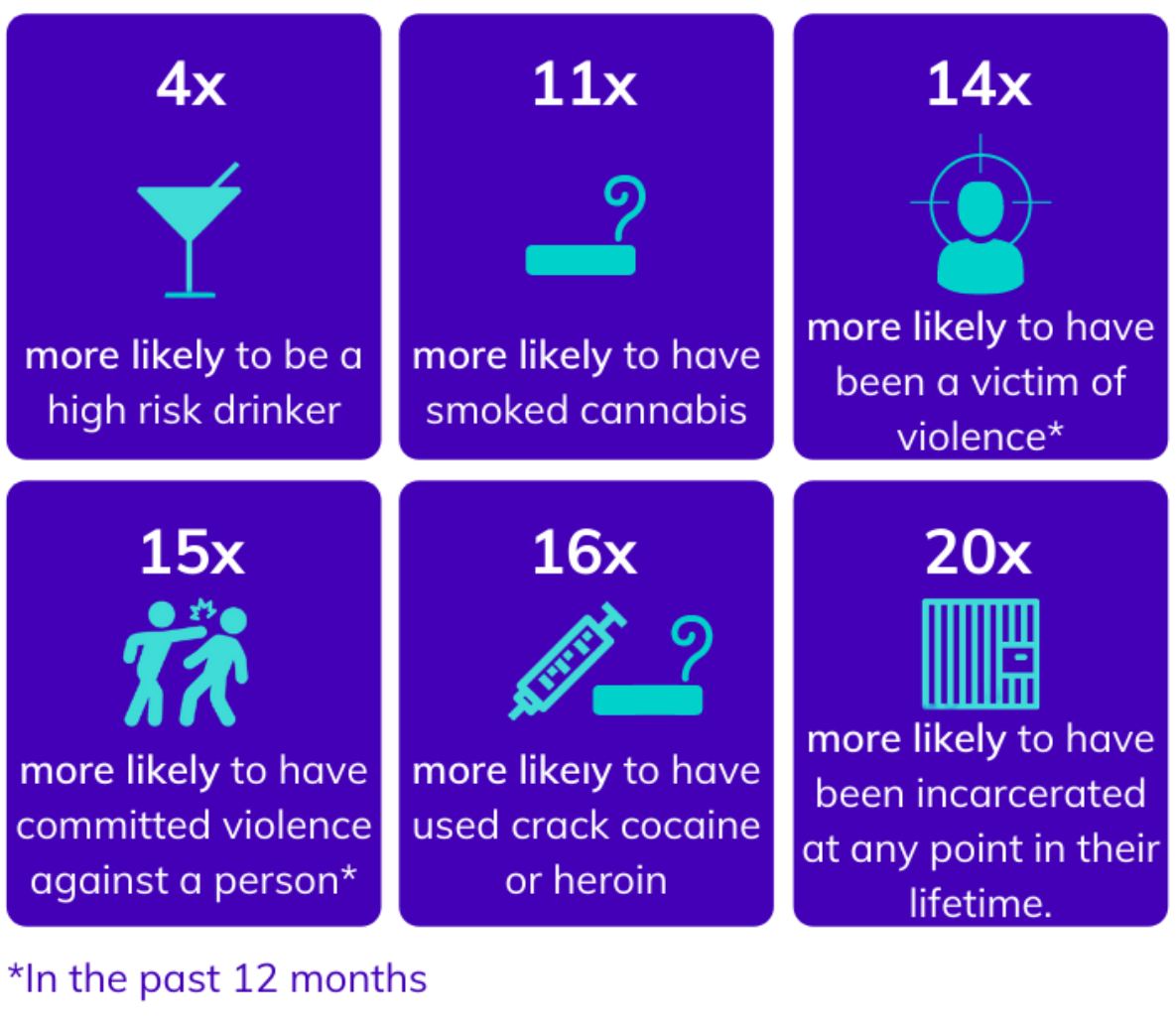 In collaboration with Bangor University, Public Health Wales explored the prevalence of ACEs in an offender population, to better understand the association between early childhood experiences and offending behaviour. This research demonstrated a much higher prevalence of ACEs within the offender population, and that multiple ACEs can increase the risk of being charged with a violence offence, serving a sentence in a young offender institute, and becoming a prolific offender.

The publications on ACEs in more vulnerable populations can be found here:

Understanding the prevalence of adverse childhood experiences (ACEs) in a male offender population in Wales: The Prisoner ACE Survey (report)

Voices of those with lived experience of homelessness and adversity in Wales: Informing prevention and response

Responding to ACEs in Wales

Research has been carried out across sectors to understand existing responses to vulnerability and to identify opportunities to further enhance multi-agency collaborative working to be more responsive to the needs of vulnerable individuals.

In Wales, a public health approach has been taken to develop trauma-informed services and enable a whole systems response to individuals affected by trauma. This includes working with police, prison and probation services, local authorities, youth justice services, education and housing.

With funding from the Home Office and Welsh Government, Wales has been given the opportunity to build a national response to ACEs and to drive forward change across sectors. Programmes of work, including the ACE Support Hub Cymru and the Early Action Together Programme has made great strides in improving responses to vulnerability and increase access to early intervention and prevention. This work has provided a strong foundation for the Wales Violence Prevention Unit to continue to build on in collaboration with the ACE support hub and E.A.T. programme.

To learn more about these programmes of work, please visit the following websites:

The Early Action Together Programme

A Health Needs Assessment: The impact of COVID-19 on children and young people’s experiences of violence and adverse childhood experiences (Full Report) - Welsh

A Health Needs Assessment: The impact of COVID-19 on children and young people’s experiences of violence and adverse childhood experiences (Executive Summary) - Welsh